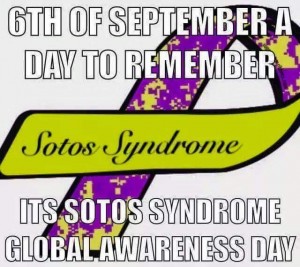 Today is a special day. It’s not a birthday or an anniversary, but it is special none the less.

What is Sotos Syndrome?

“Sotos syndrome is a genetic condition causing physical overgrowth during the first years of life. Children with Sotos syndrome are often taller, heavier, and have larger heads than their peers. Because of the distinctive head shape and size, Sotos syndrome is sometimes called cerebral gigantism. Ironically, this rapid physical development is often accompanied by delayed motor, cognitive and social development. Muscle tone is low, and speech is markedly impaired.” You can read more here.

And why is Sotos Syndrome important to me? Well, I happen to care a lot about a little guy who has Sotos Syndrome. I am a member of a group Who I Run 4. The group is full of thousands of runners and special needs kids and adults. They randomly pair up the runners with the kids and adults. I waited over six months to be paired with my buddy! Now, when I run I think about him.. I think about the challenges he faces and has already overcome in his young life. And, when I get medals, I send them to him!

The group has all sorts of members.. Some runners are just beginning, others are very fast! Some only run for fun, others spend each weekend winning local races.

And the buddies are amazing! There are infants all the way through adults.

It’s really just a chance to make a connection. To get to know someone and cheer them on. The runners push the buddies and the buddies push the runners. It’s pretty freaking cool. 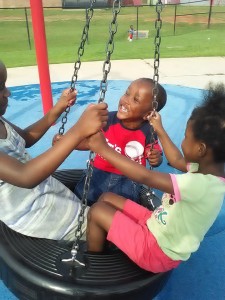 Speaking of cool.. This is my buddy! He just turned three a couple weeks ago. He lives across the country from me in Florida, but he pushes me as I run. He also recently started *walking*! The video his mom posted brought me to tears.

And isn’t that smile amazing?

So, I hope that this makes you think a little bit about Sotos Syndrome. And I hope that you will keep my little buddy in your thoughts this week. Maybe you could even run a mile for him, too?

One last thought… The Who I Run 4 group is amazing! But, it also has a massive waiting list! There’s no wait if you are a buddy, but if you are a runner you can expect to wait at least 6 months (worth it!). I would love to see more buddies learn about this organization. So, if you know someone who could use a runner in their corner, please spread the word.