So, I’ve been wanting to post about this since I was going through it.. The concert on Friday was *amazing*! We went to see Earth, Wind & Fire along with Chicago.
Brian surprised me with tickets for the concert for my birthday. And the bigger part of the surprise came when we went to our seats. We were in the middle of the 3rd row! I am pretty sure that’s the closest that I’ve ever been other than standing room only shows. And near the end of the show we stood up and were close enough to touch the stage.
They opened the show with both bands playing together… 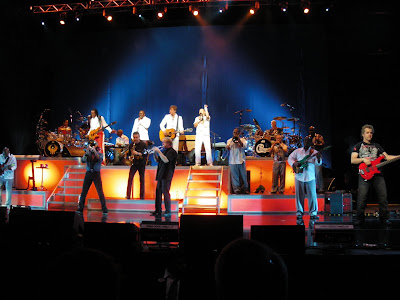 Then Earth, Wind & Fire played their set. Hearing the horns live and seeing all the energy is just so much fun.
We also had a great time people watching. There was a single woman in front of us who just rocked out the whole night. She looked to be around 60 & asked Brian how much a beer was. When he told her ($8) she responded, “Boy, you must be thirsty.” Ha! She had a very cute twang to it all as well. There were also a few couples who looked like they were wearing the same outfits that they wore to watch Earth, Wind & Fire some twenty odd years later.
Then Chicago took over for their set. I knew every.single.word by heart.
Then, they played together again. It was a two hour long show that went by in an instant. And we were both beat from singing and dancing the night away afterwards.
Here’s a little silent video.. we didn’t have the right camera for sound…

I know it’s not right to brag, but I need to just a bit. After the concert, Brian surprised me with a night at the Arizona Biltmore. The room was beautiful and the bed was so comfy. Then we slept in! And after all of that we had a couples massage. How did I get so lucky? I’d say that it was a great way to start this next year of my life. I feel like I’ve started my 30’s going strong!