The sprint triathlon was yesterday morning.

With all of my races, I get nervous and can’t sleep. But, usually I am really excited, too.

This time around, I honestly wasn’t. I was just freaked out.

Danny was doing it with me and he admitted to being a little nervous (huge for my 13 year old boy to do that!). So, I was trying to keep it in check (and probably failing).

Friday night we laid out our stuff the way that we envisioned it for the race the next morning and practiced putting our shoes on. It felt silly! And, since nothing looked quite the same at the actual race, it probably was. But, I think it did help my nerves.

We got up around 5:00 in the morning.. My neighbor, the one who thought up this whole thing, loaded up our bikes into his truck and we were watching the sunrise as we drove to the race.

This entire thing was so new and foreign to me! We racked our bikes and laid out our gear for the transitions, but there was hardly any space. When Danny dropped his bike at the second transition he wasn’t even able to put it back.

For this swim, we were doing a serpentine of the pool, it was 8 x 50m laps. And they didn’t let you dive… you jumped in, one at a time, every 5 seconds roughly by pace. I knew this ahead of time, but it was so hard to envision! Dan started before me and his swim looked great. I have no clue how he did it without goggles (even with goggles I got jostled by other swimmers!), but he started ahead of me and gained ground.

When I jumped in, I a managed to inhale a ton of water. I spent most of the first lap trying to avoid choking and drowning. It was ugly! And my swim really didn’t get any better. I couldn’t get a rhythm, I kept getting trapped behind 2 slower swimmers at a time. I had a hard time breathing.

But, I will say that it didn’t wear me out! I had more laps in me. I could have gone farther/faster had I not started out in such a poor way. So, live and learn for next time.

When I made it to the first transition Dan was still there. He was a little slow getting into his running gear so we left on bikes together.

This was the last point I saw him :/

We took off on the bikes and I actually felt pretty good. I kept up a decent pace, nothing crazy, but it was ok. 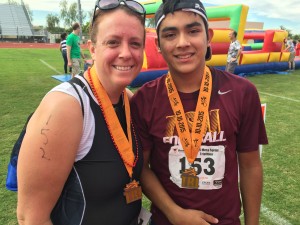 I kept waiting on Dan to pass me. He never did.

Later on, I learned that his shoe lace had come undone and been caught in his chain. His chain even popped off and he took a spill.

While I was worrying about him, I kept telling myself that *someone* would help my baby. I told myself that if he were hurt they would call. If he broke down, he would get back to the transition point and someone would call.

Turns out, he was on his own, but he handled it like a champ. It just took a huge bite into his time.

I was even more worried when I didn’t see his bike at the second transition, but since I was jogging, I sent a text to Brian. Knowing that both of us were looking made me feel a tiny bit better.

The run was ok.. It wasn’t fast or really slow for me. My GPS was off so I have no clue of my actual pacing or time, but I got it done and felt great at the end.

Brian and the other kids came out to cheer and I totally teared up when I saw them. Their high 5’s gave me the boost to sprint to the end.

Danny finished within a couple minutes of me.

So very proud of that boy!

He told me he’s not super excited to do it again, but he also admitted that what he really didn’t like was waking up at 5:00. So, the second I find a race around the crack of noon, he’s all in. 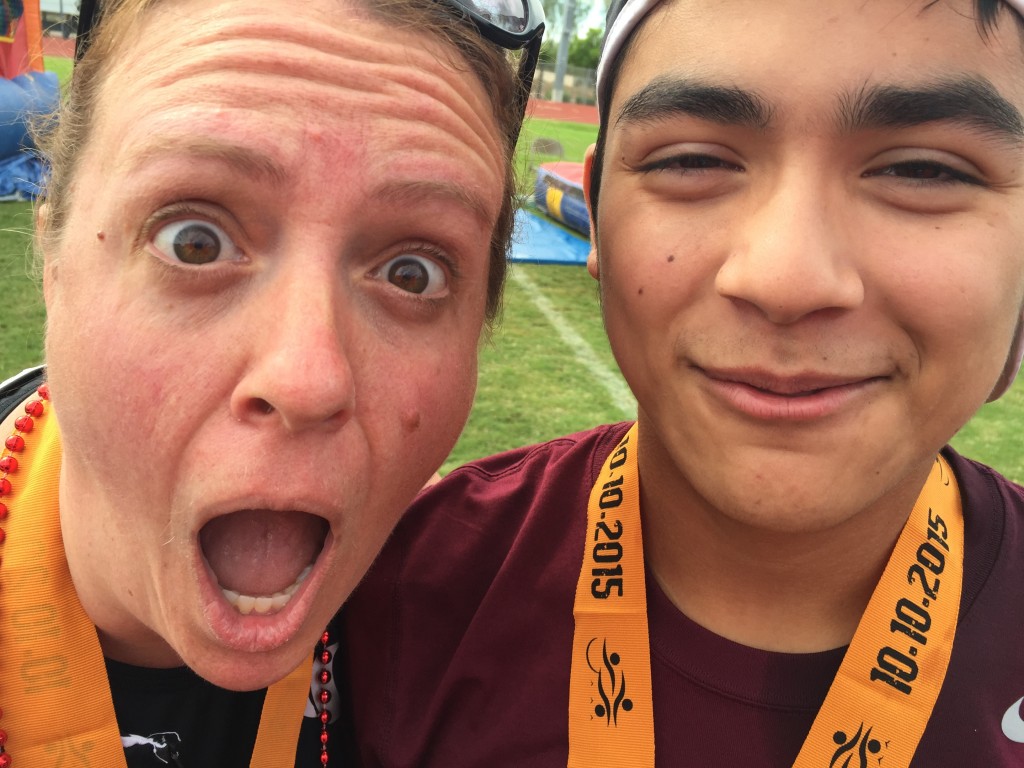